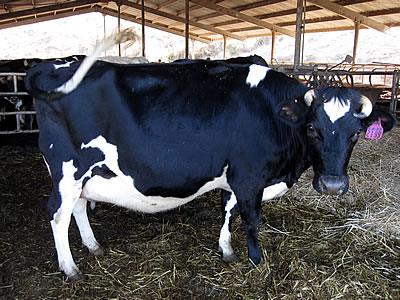 Neospora caninum is a microscopic protozoal organism found worldwide and causes a disease called neosporosis.  N. caninum is a parasite, and thus must live and reproduce inside another creature.   Canids are the definitive hosts of N. caninum, so a dog (or coyote or wolf) must be part of the life cycle and then can shed eggs (oocysts) from N. caninum that can infect other animals.  Those other animals, with one exception, are intermediate hosts, meaning that the neospora organism grows in them but doesn’t really cause any problems.  That one exception, though, is cattle: they are aberrant hosts for N. caninum, which means that cattle get a disease from having this parasite.  Unfortunately for us, that disease is quite significant—neosporosis is one of the most common causes of bovine abortion, especially in intensively farmed cows such as we have in southern Ontario.

What Are Signs Of Neosporosis?

Are There Specific Abortion Patterns That Point To Neosporosis?

No, it’s hard to define a neosporosis abortion pattern.  Neosporosis can cause a low-level, consistent and persistent history of abortions (endemic pattern), e.g., 5% every year.  It can also cause an abortion “storm” (epidemic pattern), with up to 60% abortion on one dairy farm described.

How Does It Spread In A Herd?

There are two ways neosporosis spreads: horizontally and vertically.  Horizontal spread happens when a cow consumes feed or water contaminated with N. caninum oocysts, which means that an infected dog shed those oocysts on that feed or water.  Vertical spreading occurs when the parasite spreads to its placenta and on to its fetus in a pregnant cow.  If the fetus is infected, it is known a congenitally infected (CI) calf. A CI calf is born with the infection but may be completely healthy otherwise.  The parasite can live in the CI calf for years and only sporadically affect the CI’s calves several lactations later.  Once a cow gets neosporosis, though, that cow is infected for life.  Every pregnancy is at risk for abortion, a deformed calf, or a CI calf.  It gets more complicated, though, because although every pregnancy is at risk, for some reason not every pregnancy is affected.  The vast majority of pregnancies from CI animals are normal—95% of them—and only a small percentage of CI calves go on to produce CI calves themselves.

For example, a cow consumes infected water and becomes infected with neosporosis (horizontal spread).  This cow later calves out Calf A that seems healthy and strong, but Calf A was infected while in the dam’s uterus, so Calf A is a CI calf (vertical spread). The following lactation, the cow has Calf B.  Calf B is not infected and thus not affected.  The next lactation, due to neosporosis, the cow aborts Calf C during her second trimester.  An uninfected dog accesses the placenta and thus ensures the spread of infective oocysts around the farm (more horizontal spread), while the farmer decides to cull the cow and doesn’t think more about the situation.  By now Calf A is all grown up and ends up with two mid-pregnancy abortions in a row.  Calf B, in turn, produces a lovely calf.  What caused those abortions?  Without tests, there was no way of knowing that Calf A was a CI calf and Calf B was healthy.  Even though Calf A’s third calf may seem healthy, there is a chance it, too, will be a CI calf, leading to further vertical spread.

How Is The Infection Maintained In a Herd?

As the above example shows, neosporosis can be latently (quietly and harmlessly) maintained within a herd through 1) dogs contaminating feed and water sources and 2) CI calves maturing and giving birth to CI calves themselves.  It’s the perfect survival strategy for the bug.  The farmer doesn’t suspect a specific bug—tough to see a pattern in the abortions—and the bug thrives happily ever after.

How Exactly Does This Parasite Damage A Pregnancy?

The answer depends on the stage of pregnancy.  If the placenta and fetus are infected early in the pregnancy, early embryonic death usually occurs.  It is very rare for a fetus infected before Day 95 of the pregnancy to survive, but abortions can happen later than that, too.  The fetus is then resorbed (the farmer might not notice anything until the cow comes back in heat), mummified (a nasty mess of decaying fetus that can make the cow systemically ill), or stillborn.  When infection happens during late pregnancy, the calf may be alive but have defects.  The parasite travels to the fetus and placenta and grows there, which in itself may cause abortion, but it also seems to send signals to the cow that cause luteolysis.  This is equivalent to giving a pregnant cow a shot of lute.

Is This A Significant Problem  In Ontario Dairy Herds?

Yes.  A 2005 study in the Canadian Veterinary Journal looked at 930 cows in 31 herds in Ontario. The researchers found that 71% of the herds had neosporosis present, and at an individual cow level, 8.2% of cows were infected.

How To Approach This Problem?

There is no known drug to clear a cow of the infection.  No particularly effective vaccines are available. The best approach is controlling the problem, through 1) culling positive/infected animals, 2) preventing entry of infected replacements into the herd, and 3) preventing likely routes of horizontal infection, e.g., ensuring dogs don’t defecate or urinate in cattle feed sources.

How To Recognize A Positive/Infected Animal?

For once, there’s an easy answer.  For $13.50, plus the cost of shipping, we will send the blood sample to AHL and have it tested for neosporosis (turn around time: two weeks).  It’s an accurate test that shows whether the cow has ever been infected with neosporosis. Since the “once infected, always infected” mantra holds true in this case, a cow that tests positive is at risk of throwing a CI, and thus culling should be considered.